The hero who worked in Guangzhou described his past four years as a former girlfriend, making it impossible to tell the difference between reality and dream. Once in a while, he swam between 2012 and 2008, and finally he woke up in his dream but in reality Ben crash, he knows, he did not want to go to doubt those innocent dreams, do not want to face those so-called reality. He knows that for four years, it is a disease. 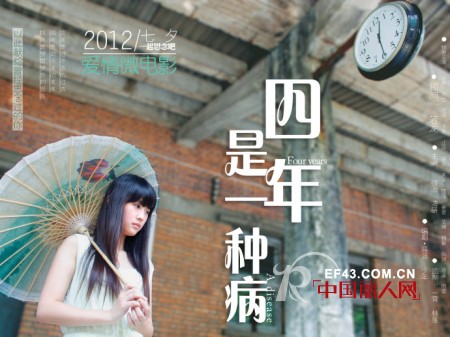 In recent years, the rapid popularity of micro-movies has aroused the concern of the electricity business community. Low threshold, easy to participate in the form of micro-movie has become the darling of e-commerce marketing activities. From the writing era to the reading of the era, in the three-dimensional multi-media communication, fast-paced life style, the amount of information explosion in modern society. How to effectively mobilize the masses of pieces of time, spread the brand, who is the winner, has become a business consensus.

Yin Man, as a well-known Amoy brand women , is dare to be the first to lead the team in the Amoy brand self-directed micro-film "four years, is a disease," with a view to more comprehensive way to promote the nature of the Yin Man cotton and linen life style, as always.

According to the film director, "four years is a disease" is a super-small-budget movie, will be held on the eve of the Tanabata microblogging platform and the major video sites publicly released, is specifically for the Tanabata festival to create a grass-roots love micro-film , Especially dedicated to everyone who had miss, cherish the moment, do not wait until the lost in the fantasy of hard to miss the past.

"Four years is a disease" The premiere entry-site crowds, unusually hot. We are waiting for micro-film.